Sadly, we blame this and that about how breeds deviate, but this dog has nothing to with a breed threatened with any type of extinction.

It was RE-created in the 1990’s by a man who wanted to have a dog named after him for posterity:Jean Claude Hermans. He created, in passing, a lot of myths that many ignorant people believed “hook line and sinker” and adapted history to his whims..and his plan was to destroy/anihilate a breed and re-create his own. This is HIS creation, copied by many who have not a clue. Sadly, the info and many fallacies are propagated…

After repeating over and over …  …and over that I needed to do totals on Ermengarda’s /Coccolina’s name in pedigrees around the Barbet world..I finally sat down and did it. Extremely time consuming because done with a paper and pencil….BUT , the exercise does give you time to understand many ” things” in our organized Barbet world.

As a simple example for a start..

Colleen in Sweden. Colleen had litters with Luddelumps and Quaciendas. Then she had issues, never resolved with the club who set her aside. Luddelumps was the first breeder to have Barbets in Sweden. They were also cast side for xyz reasons. Brush away 1.

Cooper. A litter of 6 because the type and background history  at the time was not appropriate. Breeders turned to breeders for studs. Caspar, progeny gave 4 pups in 2016. When you compare with other studs and usage, you draw your own conclusions.

Comparing  who did and said what and their influence on decisions is enlightening when keeping in mind the cyno-political situation of the time.

Chi chi l’Amoroso. In Finland, they are under a state of PEVISA which means each stud can only sire litters which total 15 pups. That is exactly what he did. The cyno-political situation there is more about crossbreedings  to fabricate hunting dogs than carrying on a line or a breed. The examples from the past few years confirm that.

Caya in France. Caya had 10 pups with Bepop  which was nice at the time ( a Barbet I kept under my roof for 10 months to help get the breed started in the UK/ you’re welcome). He is in the pedigree of 132 dogs. Many breeders making the trip to the UK for the color in his line. His son Dudley who was not ever supposed to breed, placed and taken back produced 42 pups. Many in Dutch pedigrees produced the type of the line. Many also came from as far as Switzerland to mate with Netis Hazzah his son, who has produced 48 pups to this date. Caya’s total branch so far is 132. Most of the people who went to the UK did so also because it was best not to talk to me anymore since I had already voiced my opinion on what was happening, in our organized Barbet world.

Climax was in 2010/2011/2012 just before SYMPOSIUM catastrophe  when the research I had been conducting mostly on my own led me straight to Poodle references and crosschecked facts. No good for the breed or its governing authorities. The Poodle already existed. There had to be another track…Since 2003, I had spent a lot of time, but the conclusions were there. This is when it tipped into nastiness, bad mouthing and warnings of different sorts by the voices of knowledge around the world. People had been happy with the “Poodle” bit and it made everything much easier that working on a breed threatened with extinction. I had voiced my concernS with what was going on and disapproved of it, publicly as I do today and will continue to do so. That was the kiss of death for Elaine.

So facts in front of their  blind eyes that they chose to ignore in order to continue  down their own path laid out by internet stories and copy and pasted hi- (socute) stories. A very lucrative business could come  to an end if too many listened to me..

Now the case of Charly..I was very lucky to keep in touch with his owner and family who could think on their feet and assess the goodwill of the different protagonists who came through their domicile and studding  was not really in their wishes or objectives. Charly is in 86 pedigrees as some were “refused” a mating. Not into cyno-politics.

Chesara. 1 litter but…her progeny Ela Samba did the rest..85 times she appears in pedigrees. No cyno-politics on this side of the French border, but her situation was much different in her country of residence due to cyno-politicking and  the likes making her life difficult.

Compay II. Due to collaboration, interactive help and support..with some, he has reached a stunning figure of close to 400 since all of his litters are not up to date in database. At some point in time, I did think it was a lot..but what is a lot with others re-using studs which are far from breed standard. After all..

From looking at the names of the breeders and who did what, historically it is interesting to follow a thread. This is where it can be compared to the past and who did what when, too. I have that information. More the reason to shut me up.

That is what got me thinking about what went on in the 1980’s. On a much smaller scale, but many parallels. Badmouthing, alternative facts..and paving the way to?

Back then, it was very easy to substitute dogs in matings/pedigrees..The first one being Lynx/Ops mating which probably never took place since our famous color genetics specialist would say it was not possible for always having so much to say about everything..along with some facts about him not being interested in reproduction.  BUT of course anything is possible with a mutation or whatever supports the other truth about the breed.

Then, we most often talk about Mrs Pêtre but never about the other 2 breeders around Paris who must have helped each other especially in the mid-80’s when there were 2 clubs fighting for SCC statute. Ring a bell? Well a sentence keeps coming back to my mind said by the late Françoise Loiseau..when she saw them arm in arm in 2005..at a club show. Tiens, tiens..

Looking at who owned who and who went to shows and did this and that is of great help trying to wade through the types produced which would connect some of the dots to the 70’s and… before. That alone would be out of question for someone wanting to re-create a breed from scratch along with the fame connected to it.

In the early 80’s lots went on that has influenced /have an impact on the present, but we do not know that it if we just look at pedigrees. The cyno-political context is of utmost importance. That has not changed. What has not changed either is the desire of both sides to continue in their path. One for truth and the other for fear of truth and what derives from it. Derive is a very good word in this case for its multiple meanings: to obtain a substance from another/to “get” something from something else. That is basically what has happened to the breed: it has been derived and to such an extent that coming back to the source will be or is literally impossible. The breed is seen as degenerating here and there in photographs and forums, another interesting word : Public medium (such as a newspaper column) or place used for debates in which anyone can participate. In Roman times it meant a public place at the center of a market or town where open discussions on judicial, political, and other issues were held. In FB times, it means only those who know very little or nothing and are not a threat, can post.

Others are invited to stay away. That is our Barbet organized world today…but take some time to digest your facts, if that is what they are and on that happy note..enough said for today.. back to more research! 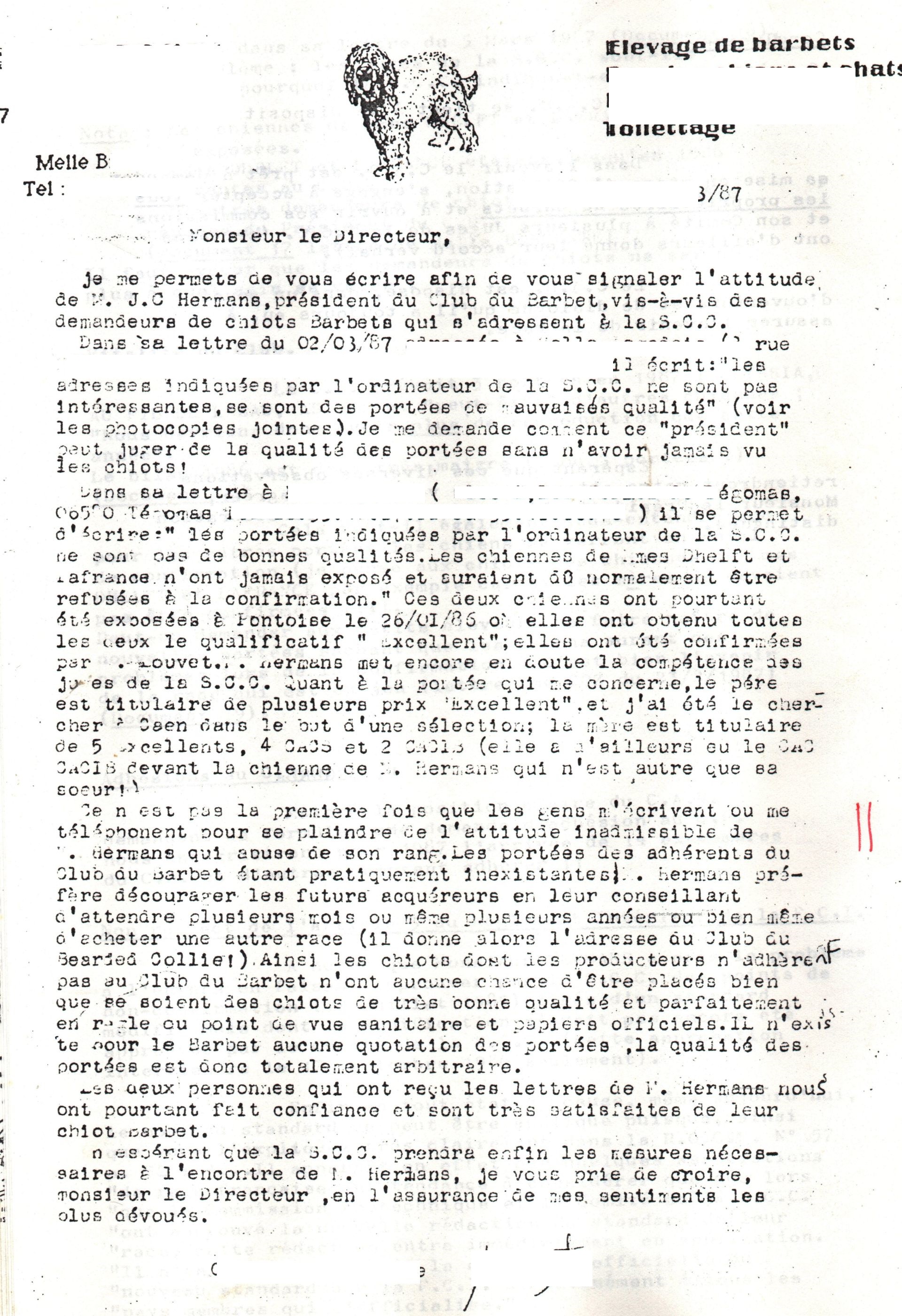 The link below will give you access to the history of the breed “en images” so everyone can understand! There are a few mistakes to be corrected, but the overall idea is there. 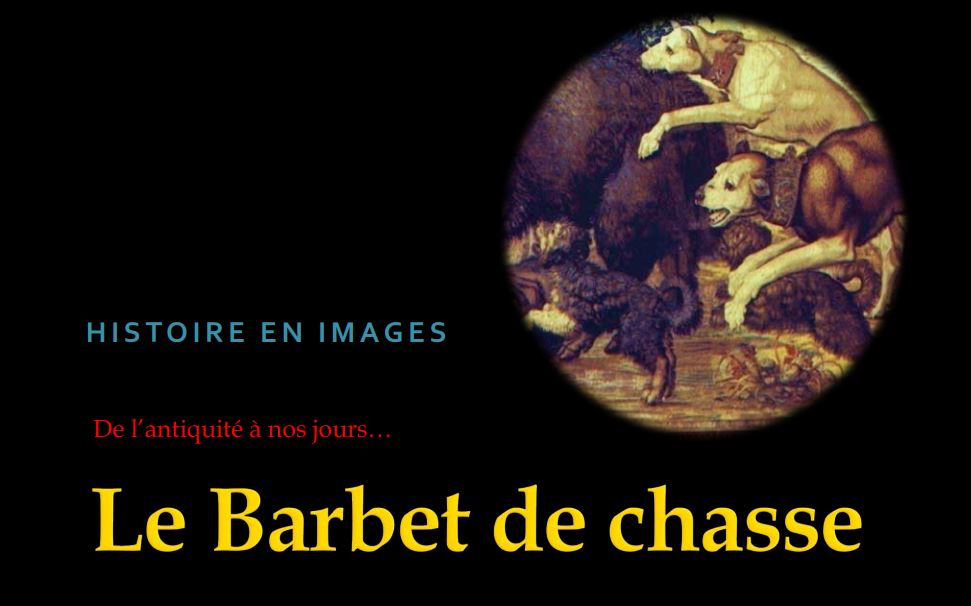