There have been several crosses since the 1930’s. Ours is not to reason why or how they took place. Some may have been pure accidents, others were for a particular reason (hunting ability/nose, illness, character, coat, structure or inbreeding problems).

These are not in order of importance. In the 30’s it appears a Bouvier de Flandres was used since at the time there was a ressemblance to the Barbet. 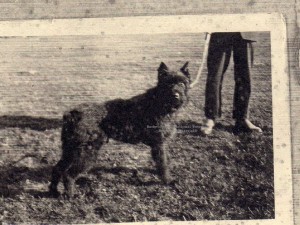 This is Médor, he was found in the north of France pulling a milk cart, bought and confirmed as a Barbet ATI.

A Chien de Crau, an old French herding dog in the Crau region of France, in Camargue, was probably also used, since it bore a ressemblance to the Vieux Barbet and still does to this day. 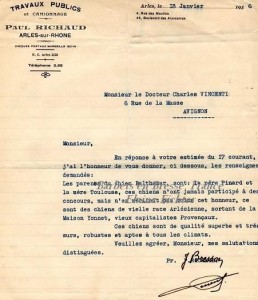 It looks like the one found on a parking lot in St Rémy de Provence and confirmed ATI, was also of that  rare breed. His name was Islam.

In 2008, took place the fisrt Chien de Crau meeting in St Martin de Crau. Mrs Pêtre and I went there to see the dogs. It’s 30 mns away from Tarascon/ St Gabriel, where Mrs Pêtre lives. What a day…Mrs Pêtre came away saying that if she had been younger, she would not have hesitated one second to use one again…for a crossbreeding! 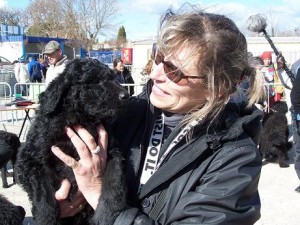 This is me in the photo…and of course all puppies look alike when they are young, but I was really happy to hold one and touch it. When they grow up, is when you see the differences…or similarities. 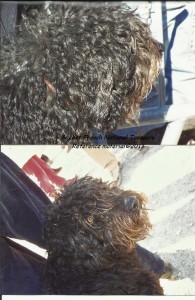 This was a beautiful female. I was not able to touch her, she was a bit scared. She had an amazing open curled coat…a bit shiny .

Sadly, over the years, there has been a movement to silence all those crosses  and that makes it difficult for many to understand why some Barbets look soooooooooooo different making everyone think theirs is perfect without referring to the standard and that any dog with a long coat between 50 and 70 cms in height, is a Barbet…and a dog with a shaved body and ears is also called a Barbet, with no particular logic. The French breed club has never the breed with any type of breeding plan, so intitatives are individual and sometimes catastrophic.

Below, since The Griffon Korthals with a long coat reminds one of a Barbet, why not have attempted to use one to bring new blood? An “H” litter of Mas de la chapelle kennel was never registered. A test litter? 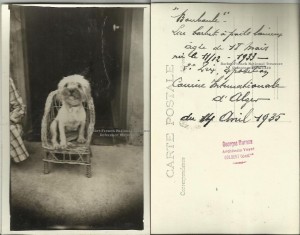 More recently I was told a Barbet was used “back then” to refresh the Bouvier de Flandres blood…it appears several people had the same ideas!

A Braque was crossed into the breed, too, back in the 30’s but we only ever saw the Barbet types. Perhaps for the pointing ability?

This is the Barbet ( pure and very Barbet typed) x IWS result. 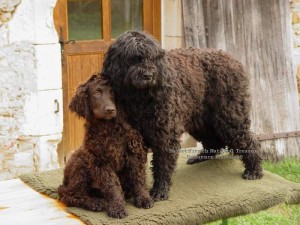 Here is how this one happened and why. The litter is officially registered in the Netherlands. ( cross no.7 of the list) 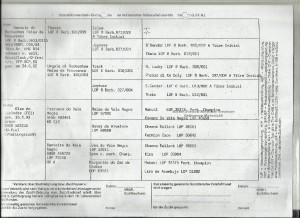 Below is Hercule di Barbochos Reiau de Prouvenco. He is one of, if not the most beautiful Barbets ever created. He was used for 2 crosses because if any should have been used to try to forward the breed, he certainly would have been the one. It is said you select the most typical subject of the breed, in morphology, character and working ability to crossbreed. 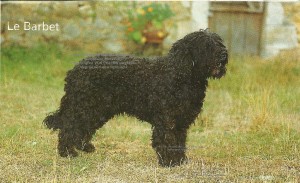 Photo originally published (with authorization), in VOS CHIENS magazine in 2002. no. 204

This was his partner, a Portuguese Water Dog named Elsa do Lusiadas.In the photo below ( center). This was her younger before the graying factor set in.(on the left). 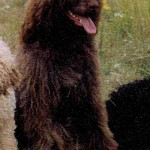 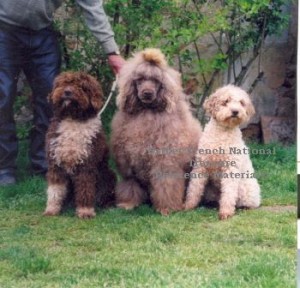 The result was an ATI. Ratzeputz. 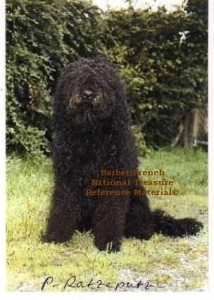 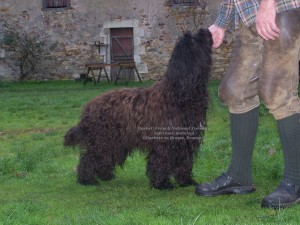 another typical subject. From that litter came ( among others) Vetliner, Valençay and Vincacao,  as males whom we all know and Vermouth, Valdepenas as females.Why are these important? Because when you look at them, you see the result ADULT of a crossbreeding where some look like mom and others like dad, as Eugène Gayot explained very well in his book LE CHIEN in 1863. 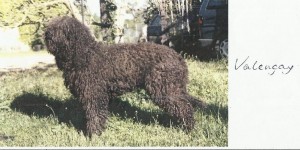 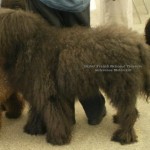 Valençay alledgedly never reproduced because of D hips, however there are several dogs who today look like him with the same type of dense difficult to manage,  matted coat. As they grow older, this type of coat is expected, on the right; above.It very much looks like Elsa, the PWD’s coat. Difficult to know if that is then a typical Barbet coat? Or a crossbreed coat? Which is the most desired? 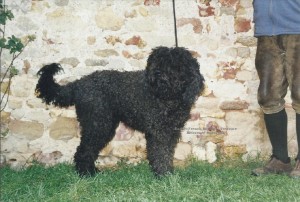 Vetliner and below his brother Vincacao ( dna cannot prove relationship of siblings but of parent/son or daughter.)Vincacao was my Thelma’s father ( dna proved). Vincacao is dna proved as Sangria’s son. However seeing that the the 3 males V names all have similar dna and the 3 if them died the same year, we can suspect they were officially siblings and sons of Sangria. 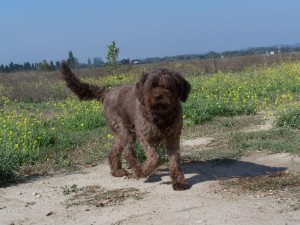 Below are the girls from the cross litter with a typical “Hercule”type coat. Valdepenas, Vermouth and the head of Verveine. An open curl shiny coat. It’s much easier to manage and keep up, for a hunting dog! 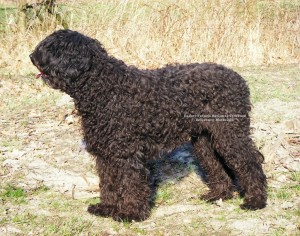 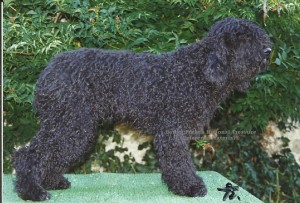 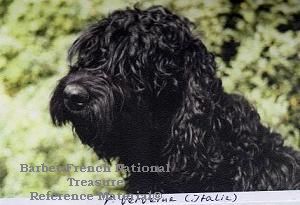 Their coat comes from the pure Barbet:Hercule and his type of coat can be traced back very easily to Mrs Pêtre’s  earlier dogs. Production since can show some same types of coats in “all directions/lines”, meaning IF in a litter there is old Barbet blood, there is a possibility of the coat coming out. The flat hair on the head is generally also a givaway of the griffon type.

Which is the better coat for a hunting dog? Good question. A crossbred coat or a coat that is easy care and consistant in type going back several decades? I have an idea, don’t you?

Then……..Poppenspaler’s Vincacao was mated to Escribania de Ubrique, a Spanish Water Dog and produced a brown litter ( of course).( cross no.3) 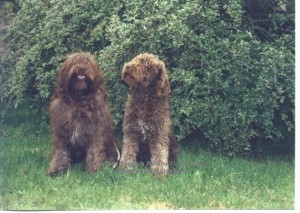 here he is shown with his daughter Brandy. One of the sisters went to Canada and was the foundation stock with a Poodle x Portuguese cross ( Luz do Condinho)  named Conga.

Brandy also mated with a cross issued from a Poodle x Portuguese Water dog and some Escribania de Ubrique, the Spanish Water Dog came back out. That also brought some light eyes in brown dogs.( non standard) 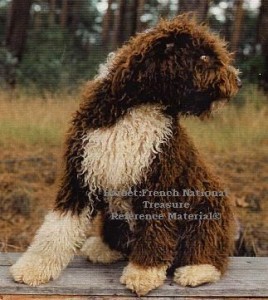 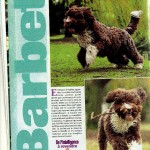 On the left: Escribania de Ubrique and a descendant shown in an article of REVUE CHIENS 2000 no.351 April 2008( courtesy of the magazine) and qutoed this Barbet as a “specialist marshland hunter “… The Spanish Water dog comes in 2 distinct types: one smaller with a barrel like chest and the other a bit taller. Regardless the charcater of the Spanish Water Dog is not the same as that of the Barbet and all dogs are nice and good with children, but there are different breeds for different reasons.

As of recently a mating is planned in Finland ( or has taken place) between another Spanish Water Dog and a bitch with SWD/ Poodle/PWD and Barbet in her. The result ought to be interesting.

Why was this done? Back to the top? Ours is not to reason why or do we just continue mixing everything with everything and continue showing generic type dogs with no brand identification but the coat, which so far has been just about the only preocuppation, other than O% inbreeding.

I remember a conversation with Jean Claude Hermans when I told him about the SWD in the Barbet and he said “what on earth for?” 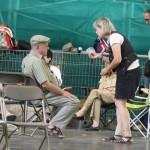 At some point I will. Why I have been fighting against the homemade pedigrees for several years? Now, are you beginning to understand?

Ursus has gone to Canada to help what he can and Ulysse, well you know his story: banned from reproduciung in Switzerland on the grounds that he is not curly enough or tall enough… 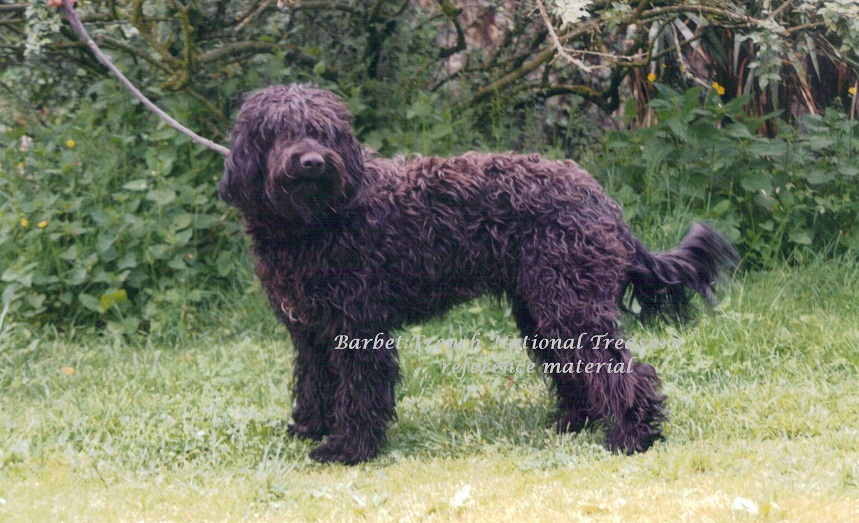 The cross of a Barbet ( poodle type, below) and another Barbet( with Poodle in the pedigree for several generations, but old barbet type) can give part of a litter of Poodle types and Barbet types. 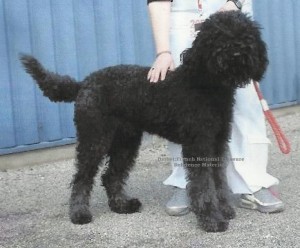 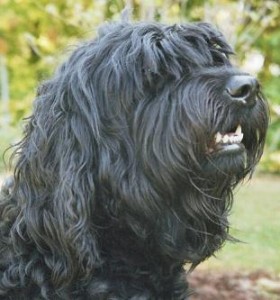 Below left a French Champion LOF Barbet and the result of a cross Barbet and Poodle, let’s call him Emil. Emil looks just like the dog on the left. 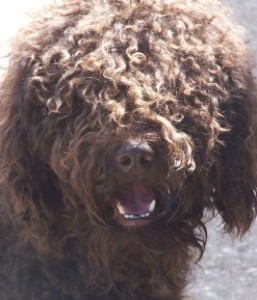 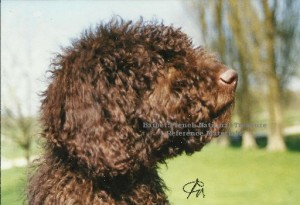 Do we then consider that the result of a cross regardless of the type is a pure Barbet or do we refer to the standard and historical documents to come as close toç the type when reconstructing the breed?